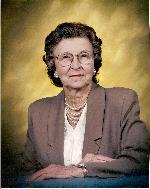 Daley Frieda Knobloch passed away on Monday May 17, 2010 at her home in Manheim after a courageous battle with cancer.
Daley was born on October 8, 1923 in Winchester , Texas to William "Bill" Hentschel and Alma Hermina Symank Hentschel. She was baptized, confirmed and married at St. Michael's Lutheran Church in Winchester. She grew up in Winchester with four brothers and two sisters. In the years to follow, she manufactured airplane parts in La Grange, was a seamstress for the Invader Boat Company in Giddings, built bomb boxes in a sheet metal shop during World War II, was an usher and candy counter girl at the Paramount Theatre and she served as a waitress in many restaurants over the years.
She attended Nixon Clay College, where she studied bookkeeping. Of all the occupations she had over the years, her favorite was working for the Southwestern States Phone Company where she retired after 18 years of dutiful service as a switchboard operator.
On December 3, 1950 she married Paul Herman Knobloch. Daley and Paul started their own business together.
They had four children; Patricia Sue, Mary Beth, Myron Paul and Roger Neal. She was a member of Fedor Trinity Lutheran Church, a member of LWML and also involved in making brail bibles for the visually impaired. She loved to bake and make noodles, but her favorite pastime of all was her beloved garden. She was always ready for a game of "42" with her friends.
Daley is survived by a son; Roger Knobloch and wife Cynthia Kay of Manheim; three grandchildren, Harvey Kristek, Jr. of Odessa, Crystalynn Knobloch of Austin and Aaron Knobloch of Manheim. She is also survived by her sisters; Bernice Latimer and Irene Pietsch and her brother Elton Hentschel, as well as numerous nieces and nephews. She was loved and will be missed by all.
She was preceded in death by her parents; three children, Patricia Sue, Mary Beth and Myron Paul; three brothers, Herbert, Fred and Albert, her sister-in-law Audice Hentschel and her brother-in-law, Anton Pietsch.
Visitation is scheduled for Thursday May 20, 2010, from 8:00 AM until 8:00 PM at Fayette Memorial Funeral Home in La Grange. The family will receive visitors from 6:00 PM until 8:00 PM.
Funeral services are scheduled for Friday May 21, 2010, at 1:30 PM, at Trinity Lutheran Church in Fedor. Interment will follow at St. Michael’s Church Cemetery in Winchester.
Memorial contributions may be made to the Hospice of one’s choice.

To order memorial trees or send flowers to the family in memory of Daley Knobloch, please visit our flower store.