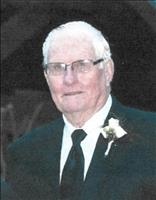 Clarence “Sonny” Wagner age 88 of Round Top passed away on April 1, 2015 in College Station.
Clarence was born on November 27, 1926 in Shelby to Harry Wagner and Lillie Luetge Wagner. He married Ruby Mae Kiel on October 16, 1949 and she preceded him in death on July 26, 1998. Clarence married Shirley Schulte on March 5, 1999. He was a retired Postmaster in Round Top for thirty-three and a half years. He served his country during World War II in the United States Army. He was a member of American Legion Post #338 and Round Top-Warrenton Volunteer Fire Department for 40 years. Clarence is also a member of the South Central Texas Semi Pro Baseball Hall of Fame and he had been drafted by the Chicago White Sox, but promised his Dad he would stay home and help on the family farm instead. He loved his grandchildren and great-grandchildren and enjoyed fishing, bingo, loved his beloved dog Bexter, woodworking and tinkering and repairing anything broken.
Clarence is survived by his wife Shirley; son, Gary Wagner and wife Linda of Brenham; daughter, Becky Exner and husband Rodney of Lexington; two sisters, Alice Mae Eberenz of Kerrville and Ila Kieke and husband Daniel of Burton; sister-in-laws and brother-in-laws, Doris and Barney Georges, Dorothy and Harry White and Patsy and Abe Farrington; two stepchildren, Lloyd Cooke and wife Cheryl of Hempstead and Cindy Jones and husband Alan of Hempstead; six grandchildren, Brandon Exner and wife Heather, Alisa Niemeyer and husband Myles, Cullen Wagner and wife Melissa, Dustin Exner, Erin Pepper and husband Tim and Cameron Wagner and wife Shanna; four step-grandchildren, Jenny Arnold and husband Jason, Chris Blazek and wife Andrea, Kathryn Austin and husband Casey, and Steven Blazek and wife Christina; daughter-in-law, Cindy Hart and husband Tommy; eighteen great-grandchildren; numerous nieces and nephews also survive.
He was preceded in death by his first wife Ruby Mae Kiel Wagner; son, Gregory Wagner; two sisters, Evelyn Toll and Irma Ahlhorn; brother-in-laws, Elton Toll, Eugene Ahlhorn and Herbert Eberenz.
Visitation is scheduled for Saturday April 4, 2015 from 2:00 PM until 5:00 PM at Fayette Memorial Funeral Home in La Grange. The family will receive visitors at this time.
Funeral services are scheduled for Monday April 6, 2015 at 10:00 AM at Bethlehem Lutheran Church in Round Top.
Interment will follow in Hills Cemetery near Round Top.
Memorial contributions may be made to Bethlehem Lutheran Church in Round Top or the charity of one’s choice.