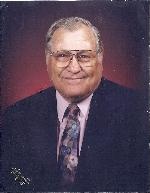 Charles Otto, age 82, passed away on Saturday January 22, 2011, at his home in La Grange, Texas following a long battle with cancer.
Charlie was born on December 15, 1928, in La Grange, Texas to Fred Otto and Addie Dornwell Otto.
Charlie married Florence Stork on August 10, 1950, at St. Paul Lutheran Church in La Grange. Charlie was an outstanding athlete as he played semi-pro baseball and continued playing after leaving the semi-pro’s for the La Grange Demons for many years. Charlie was inducted into the South Central Texas Semi-Pro Baseball Hall of Fame on March 19, 1978. He continued his avid love of sports by following high school athletics during the years that his grandchildren played sports both at La Grange High School and Fayetteville High School. He worked for the Texas Highway Department for 25 years and in later years continued in the workforce as an employee of Fayette Medical Supply in La Grange. Charlie had a passion for baseball and a greater love and passion for his family, especially his grandchildren. Charlie fought cancer for 15 years but never missed attending an athletic event whether it was a volleyball or basketball game that his granddaughter might be playing or football, basketball or baseball that his grandsons participated in. He also had a passion for deer hunting with his sons and grandsons. He and his favorite dancing partner and wife, Florence, were active in the La Grange community all of their lives and they never turned down an opportunity to dance across the dance floor with grace and ease. He also loved bowling and was referred to as “Big O” on his bowling team and he and Florence loved to play 42 dominoes with friends. Charles was a life-time member of St. Paul Lutheran Church in La Grange and was a Mason with the Masonic Grand Lodge. He also participated and was active in the Fayette County Jr. Livestock Show.
Charlie is survived by his wife of 61 years, Florence of La Grange; two sons, Wayne Otto and his wife Nora of La Grange, Randy Otto and his wife Cheryl of Fayetteville; one brother, Marvin “Bob” Otto and his wife Mildred of La Grange; one sister-in-law, Alberta Otto of Austin; five grandchildren, Rev. Brad Otto and his wife Stacie of Houston, Charles and his wife Sara of Winnie, Brittani Otto of Clear Lake and Brandon Otto and Brock Otto, both of Fayetteville and one great-granddaughter, London Grace Otto of Houston, and numerous nieces and nephews also survive.
He was preceded in death by his parents, two brothers; E. G. Otto and Fred Otto, Jr.
Visitation is scheduled for Tuesday January 25, 2011, from 8:00 AM until 8:00 PM, at Fayette Memorial Funeral Home in La Grange. The family will receive friends from 5:00 PM until 8:00 PM. A prayer service is scheduled for 7:00 PM at Fayette Memorial Funeral Home Chapel in La Grange.
Funeral services are scheduled for Wednesday January 26, 2011 at 3:00 PM at St. Paul Lutheran Church in La Grange. Interment will follow at La Grange City Cemetery.
Memorial contributions may be made to Hospice Brazos Valley of La Grange, the American Cancer Society, the La Grange Fairgrounds Ball Park Fund, or the church or charity of one’s choice.

To order memorial trees or send flowers to the family in memory of Charles Otto, please visit our flower store.