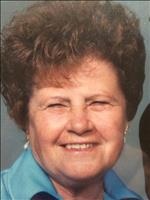 Bernice was born in La Grange, Texas on November 21, 1925, the daughter of Willie E. and Mary (Vasek) Zbranek, Sr.. She married Lawrence J. Kallus on September 2, 1967 at Queen of the Holy Rosary Catholic Church in Hostyn.

Bernice was an avid gardener and had a green thumb when it came to growing plants. Her many plants were exhibited annually at the Fayette County Fair floral department. Over the years she was awarded not only blue ribbons but also best of department, grand champion, and reserve champion ribbons and trophies. She also enjoyed canning, crocheting, other crafts, attending social functions, helping her husband with farm chores, and donating canned goods and plants to various organizations and church picnics.

She was a member of Queen of the Holy Rosary Parish in Hostyn and KJT Society #3 of Hostyn.

She is survived by her husband, Lawrence, of 47 years; brother, Will Zbranek and wife, Carol, of Fort Worth; sister-in-law, Verlene Zbranek, of Hallettsville; brother-in-law and sister-in-law, Robert B. and Lillian Kallus, of Hostyn; and sisters-in-law, Sister Josephine Kallus, OSB; Sister Mary Agnes Kallus, OSB; and Sister Virginia Kallus, OSB; all of Lisle, Illinois; along with numerous nieces and nephews.

Funeral services will be held at Queen of the Holy Rosary Catholic Church in Hostyn at 11 a.m. on Thursday, Feb. 5, 2015. Burial will follow at the church cemetery.

Fayette Memorial Funeral Home in La Grange is in charge of arrangements.

To order memorial trees or send flowers to the family in memory of Bernice Kallus, please visit our flower store.