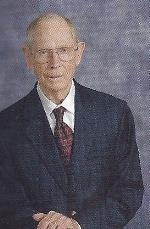 Ben Godfrey Janda, age 90, of La Grange passed away Tuesday morning, August 27, 2013 at St. Mark’s Medical Center in La Grange following complications from recent surgery. Family will receive visitors Wednesday, August 28 beginning at 5pm at Fayette Memorial Funeral Home in La Grange, with Rosary to follow at 7pm. Mass of Christian Burial will be held at Queen of the Holy Rosary Catholic Church in Hostyn on Thursday, August 29 at 11am followed by internment in the church cemetery. Father Dan Kahlich and Deacon John McCourt will officiate.
Ben was born October 19, 1922, in Hostyn in the home of his parents Cyrill M. Janda and Bozena Kallus Janda. He was the seventh of eleven children and grew up working on the family farm. He learned to play the saxophone at an early age when his father organized a family band. He later played with several bands including the Lichnovsky Orchestra, Adolph and the Boys, Lad Janda’s Orchestra, and Bill Cornelson’s swing band.
Ben graduated from La Grange High School in 1941. On June 25, 1945, he married Bernice Matocha at the Holy Rosary Catholic Church in Hostyn. They were blessed with two children, Audrey and Eric. They were married for 53 years until Bernice passed away on January 7, 1999.
His career included 26 years at the First National Bank in La Grange, and then as the State Treasurer of the KJT from which he retired after 28 years.
His Catholic Faith was the center of Ben’s life. He was a lifetime member of the Holy Rosary Church where he sang in the choir for over 70 years. He was a Church lector, served on various parish committees, and was a member of the Parish board. He was an officer of his local KJT society for over 50 years and was a member of the Knights of Columbus where he was the financial secretary for almost 30 years.
Community service was also important to Ben. He was a member of the La Grange Rotary Club for almost 50 years, serving as secretary-treasurer for 13 years. He was one of the organizers of the Fayette Water Supply Corporation, was on its Board of Directors, and served as its secretary-treasurer for 15 years. He also was the secretary-treasurer of the local RVOS lodge for over 40 years.
He is survived by his daughter Audrey Tucker and husband Bill of Hillsboro, his son Eric Janda and wife Mariam of The Woodlands; two grandsons, Denton Tucker and wife Leeann of Hillsboro and Anthony Janda of The Woodlands; two brothers, Leo Janda of La Grange and Vit Janda and wife Gertrude of Bellville; three sisters, Ann Wessels of La Grange, Delores Prilop of Angleton, and Victoria Kollaja of Houston; three sisters-in-law, Pat Janda of San Jose, California, Veronica Bohuslav and husband Gilbert of Lake Jackson, and Lil Nash of Bellaire.
He was preceded in death by his wife; sisters Frances Rainosek, Mary Lidiak, and Beatrice Kubasak; brother George Janda and infant brother Vaclav Janda.
Memorial contributions may be made to Queen of the Holy Rosary Catholic Church Building Fund; American Cancer Society Research, 1700 Lake Success, Waco, Texas 76710; or the charity of one’s choice.

To order memorial trees or send flowers to the family in memory of Ben Janda, please visit our flower store.