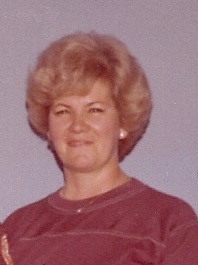 Barbara Jean Baker Case of Jourdanton passed away on March 22, 2014.
Barbara (Mamaw) was a woman who gave her love to her family unconditionally and showed everyone around her what it was to love.
Barbara was born to Maudie Mae Votaw and Virtner Edmond Baker on November 21, 1936 in Houston and went to be with our Lord on March 22, 2014 at the age of 77.
She was a woman loved by many, a devoted friend, mother, grandmother, and great-grandmother. She was preceded in death by her parents and a brother, Charles “Charlie” Edmond Baker.
She grew up in West Point and after marrying went to Corpus Christi. Barbara relocated to be near family in Jourdanton, to be surrounded by loved ones.
Barbara is survived by two sons; Charles Baker and Gene Wayne Baker; two daughters, Linda Armentrout and husband Roger and Kathy Mae Dalrymple and husband Jeff. She is also survived by her grandchildren; Shelley Armentrout, Shaderra Gansky and husband Noll Gansky, Shawnna Jenschek and husband Steven, Thalia Case, La Donna Case, Miranda and husband Alex Cruz, Analisa Camacho Case, Brandon Case, Dayton Dalrymple, Scott Dalrymple and wife Kat, Daina Case and Barbara McShea and husband John. Numerous great-grandchildren also survive.
Visitation is scheduled for Thursday march 27, 2014 from 10:00 AM until 12:00 PM at Fayette Memorial Funeral Home in La Grange.
Graveside services are scheduled for Thursday March 27, 2014 at 2:00 PM at Byler Cemetery near Muldoon.
Memorial contributions may be made to Shriners Hospital for Children, Office of Development, 2900 Rocky Point Drive, Tampa, FL. 33607.

To order memorial trees or send flowers to the family in memory of Barbara Case, please visit our flower store.