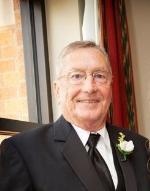 Beloved husband, father, son and brother went to be with his Lord on August 30, 2011. He was born on December 17, 1948 in Freeport, Texas to Ross and Marie Ivy of Angleton. He was raised in Angleton and graduated from Angelton High School class of 1968, where he excelled in baseball and football. He was employed by Dow Chemical for over 35 years as an electrician.
He was a member of the Knights of Columbus and enjoyed playing baseball and later coaching his daughter's softball team.
His passion was his family.
He is survived by his wife of 31 years, Shirley (Spires) Ivy; daughters, Amber Neeley, Lori Bryant, Katie Standard and husband Skylar and Jamie Ivy; grandchildren, Kendall Neely, Gunnar and Hunter Ramirez.
He is also survived by his mother, Marie Ivy; one sister, Elaine Buchta and husband Gerald; one brother, Fred Ivy and wife Cynthia. A large loving extended family and friends also survive.
He was preceded in death by his father, Ross Ivy and brother Lynn Ivy.
Visitation is scheduled for Friday September 2, 2011, from 10:00 AM until 8:00 PM at Fayette Memorial Funeral Home in La Grange. The family will receive visitors from 5:00 PM until 7:00 PM. A rosary will be recited at 7:00 PM, at Fayette Memorial Funeral Home.
Funeral services are scheduled for Saturday September 3, 2011, at 10:00 AM, at Sts. Peter and Paul Catholic Church in Plum. Interment will be in the church cemetery.
Memorial contributions may be made for Mass intentions or to the charity of one's choice.

To order memorial trees or send flowers to the family in memory of Anthony Ivy, please visit our flower store.