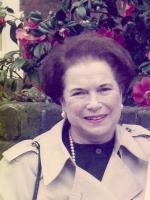 Ann Dyke Shafer Brown of La Grange and formerly from Houston and Bryan/College Station, Texas passed away June 14, 2012 in La Grange, Texas. Memorial Services will be held on Friday September 14, 2012 at 2:00 PM at St. James Episcopal Church in La Grange, Texas followed by a reception at the church and burial at the La Grange City Cemetery in the Leon Brown Family Plot. The Reverend Daryl Hay will officiate with Music Director, Elva Ulrich, orchestrating a full organ and choir performing her favorite hymns, spirituals and musicals.

Ann was a beautiful, intelligent, kind, strong and gifted Christian woman, wife, mother, grandmother, teacher, musician and civic leader in promoting performing arts. She leaves behind a legacy of high educational standards, beauty in all things and had a contagious, zest for life that was enriched with a life-long, close relationship with Christ, His Church and Community.

She was raised during the depression in Terra Haute, Indiana to an accomplished business executive father and music educator and performer mother earning her Bachelors of Music from University of Michigan in Ann Arbor, graduate work at Columbia University and completed a Masters in Music Education in Music therapy, piano, organ, voice and choral work at University of Texas in Austin in 1954. Active in the Episcopal Church throughout her life and enumerable charitable organizations she met and married William A. Brown, a fourth generation Texas lawyer, in Austin where they began their married life associated with law firms that were absorbed into Brown and Root, Inc. legal department.

After the birth of her two children, her family moved to Houston when the corporation relocated and expanded into an international civil construction corporation. She became active in creating charitable events and service projects producing musicals, fund raising galas and Christian celebratory events at St. John’s the Divine Episcopal Church, The Junior League of Stanford, Austin, Houston and Bryan/College Station, sat on boards with The Tuesday Music Club, Sigma Alpha Iota, Houston and Brazos Valley Symphony, Houston Grand Opera, International Festival Hill Music Institute, The Majorca Dance Club, Friends of the University of Houston Moore’s School of Music and Opera and Performing Arts of Texas A and M University. She served as organist and Choir Director for St. James Episcopal Church and Holy Rosary Church in Hostyn. Her ”crowning achievement” was the production of Beethoven’s Ninth Symphony with 150 voice choir with Maestro, Protégé and friend, Franz Anton Krager, with the Brazos Valley Symphony Orchestra at Texas A & M University. Ann and husband, Bill, enjoyed ten years between 1983 and 1993 in Bryan/College Station while Mr. Brown served on the Construction Science faculty. Prior to that they were involved with the development of the Leon Dancy Brown Republic Era historic farm as a Charloais cattle ranch in Hostyn near La Grange, Texas where her daughter, Lennie, a Community Economic Development Consultant and educator, lives today and operates a country inn called TEXANA Trails and Lodge. Her son, Bill, continued the Brown family’s fifth generational vocation in the practice of law based now in Kemah, Texas. Dancy, her only grand child, is following her grand mother’s footsteps as a music education major, performer and student orchestral leader at University of Houston Moore School of Music.

Although suffering from years of chronic back pain and paralysis, Ann led an exemplary life gracefully using her talents to organize and orchestrate many meaningful, community events while ministering to her family, physicians and close aides embracing all as personal, treasured friends.

Memorials can be made to the Music Programs at St. James Episcopal Church of La Grange or
University of Houston’s Moore’s School of Music.

To order memorial trees or send flowers to the family in memory of Ann Brown, please visit our flower store.