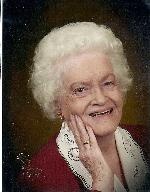 Alpha was born on July 31, 1915 at Georgetown, Texas to Robert (Bob) Hamilton and Gertie Buchanan Hamilton.

Alpha married Arthur Carter on November 16, 1933 in Georgetown, Texas. They lived in the Georgetown area most their life. After Arthur died she moved to Carmine in 1993. She was a member of the Church of Christ. She had many good friends in the Church of Christ in La Grange and Georgetown. Over the years she was involved in several organizations including church groups, school activities, P.T.A., Girl Scouts, and Business Women of Georgetown. During the years she worked at Piggly Wiggly Grocery, L&M Restaurant and Cochran Gift Shop all in Georgetown. She loved visiting with family and friends especially her grandchildren. She enjoyed sewing, cooking, music, singing and games especially 42 and baseball.

She was also preceded in death by Carter in-laws; Robert and Mable Carter, Orville and Earle Carter, Alton and Jewel Carter, Callie and Bill Ishey, Edward and Clara Carter.

Funeral services are scheduled for Saturday February 5, 2011 at 10:30 AM at Church of Christ in La Grange. Interment will follow at Odd Fellows Cemetery in Georgetown, TX at 3:30 PM.

Memorial contributions may be made to the American Cancer Society, or Church of Christ in La Grange.

To order memorial trees or send flowers to the family in memory of Alpha Carter, please visit our flower store.