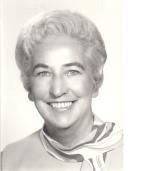 Aline R. Mitchell of Flatonia, Texas passed away the evening of Saturday, January 11, 2014 at age 99 while under hospice care at St. Mark’s Medical Center in La Grange, Texas.

Born Aline Marie Rank on November 22, 1914 in Memphis, Tenn. Where in 1943 she met and fell in love with her future husband George W. Mitchell, a Sergeant in the U. S. Army Signal Corp. Aline and George were married in Hernando. MS. on December 11, 1943. George was deployed to Japan during the Allied occupation. Aline joined George in Tokyo, Japan shortly thereafter. Following their return from Japan, they lived in Texas, Louisiana, Maryland, New York, and Arizona. Aline and George traveled extensively in Europe while he was on assignment with the US Army Strategic Communications in Germany.

Aline was preceded in death by her husband of 32 years, while in Germany, she then returned to their home in Tuscon, Arizona in 1976. She moved to Flatonia in 2004 to be near her daughter Kathy.

To order memorial trees or send flowers to the family in memory of Aline Mitchell, please visit our flower store.