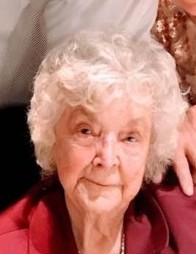 Wilda Fay Thomas, 93, passed away on Monday, May 17, 2021 at her residence in LaGrange, Texas. Fay was born on January 26, 1928 in Salma, Alabama to William Clarence Burkhalter and Willie Davis Burkhalter.

Fay graduated from high school in Alabama and attended business school. She was a hard worker and worked as an accountant for Sorg Printing which was later known as Fidelity Printing before retiring from General Electric as the Office Manager. After retirement Fay was busy gardening, cooking for family, reading, sewing, keeping up with politics, and getting a game of Mexican Train dominoes together.

Fay married Marvin Woodrow (Tommy) Thomas  in 1952 in Houston, Texas. They were married for 52 years.

Fay was preceded in death by her spouse, parents, and two brothers (Bo and Cecil Burkhalter) and a sister (Vivian Burkhalter).

In lieu of flowers the family requests memorial donations be made to Cowboy Church, Brenham or a charity of your choice. Condolences may be left on Wilda Fay Thomas’s online guest book.

To order memorial trees or send flowers to the family in memory of Wilda Thomas, please visit our flower store.